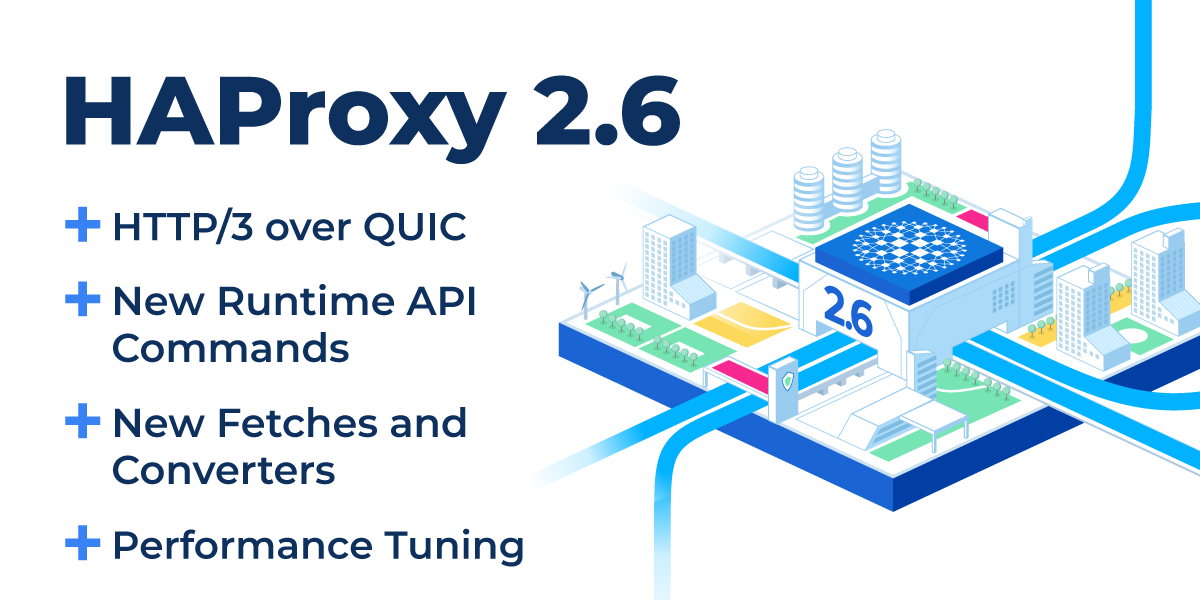 As always, the community behind HAProxy made it possible to bring the enhancements in this release. Whether developing new functionality, fixing issues, writing documentation, QA testing, hosting CI environments, or submitting bug reports, members of our community continue to drive the project forward. If you’d like to join the effort, you can find us on GitHub, Slack, Discourse, and the HAProxy mailing list.

Register for the webinar HAProxy 2.6 Features Roundup to learn more about this release and participate in a live Q&A with our experts.

In the following sections, you will find a list of changes included in this version.

This version of HAProxy adds experimental support for HTTP/3 over QUIC, which is a novel approach to transmitting HTTP messages over UDP instead of TCP. The benefits include fewer round trips between the client and server when establishing a TLS connection, better protection against denial-of-service attacks, and improved connection migration when the user switches between networks.

In the example configuration below, we enable HTTP/3 over QUIC by setting a bind line that listens for client connections on UDP port 443. The prefix quic4@ sets the protocol. Also note that we return an alt-svc HTTP header, which instructs the client’s browser to switch to the new protocol for subsequent requests. In other words, the first request will be HTTP/2, but any after that will be HTTP/3.

You’ll need to compile HAProxy with a few new options, including the USE_QUIC flag, and also link to a QUIC-compatible version of OpenSSL, such as the one found here. Want to try this out? Check out our HTTP/3 demo project.

You can use the new load balancing algorithm, hash, in place of the existing, more specific hash algorithms source, uri, hdr, url_param, and rdp-cookie. The new algorithm is generic, thus allowing you to pass in a sample fetch of the data used to calculate the hash.

In the example below, the pathq fetch returns the URL path and query string for the data to hash:

You can compile HAProxy against OpenSSL 3.0, the latest branch of the OpenSSL library.

To authenticate clients with client certificates, you set the ca-file parameter on your bind line to indicate which certificate authority (CA) to use to verify the certificate. This parameter now accepts a directory path, allowing you to load multiple CA files so that you can verify certificates that were signed by different authorities.

Similarly, the ca-file parameter on a server line in a backend now accepts a directory path, allowing you load multiple CAs to verify a server’s SSL certificate. In this case, you can also specify @system-ca to load your system’s list of trusted CAs.

A new Runtime API command, show ssl providers, available when HAProxy was compiled against OpenSSL 3.0, returns a list of providers loaded into OpenSSL. A provider implements the cryptographic algorithms. You can load other providers via the OpenSSL configuration file, which you can find the path for by running openssl version -d.

Next, the Runtime API’s dynamic server feature, which was introduced in HAProxy 2.4 and got expanded keyword support in HAProxy 2.5, is no longer experimental. Recall that the dynamic server functions let you create servers on the fly without reloading the HAProxy configuration.

Also, you can now set the check and check-ssl parameters when creating servers, which were unsupported in prior versions. Note that when enabling health checks with these parameters, HAProxy is not yet able to implicitly inherit the SSL or Proxy Protocol configuration of the server line, so you must explicitly use check-ssl and check-send-proxy, even if the health check port is not overridden.

The Master CLI provides an interface for working with the HAProxy worker processes. You can learn more about it in the blog post Get to Know the HAProxy Process Manager. The CLI received several new commands:

Here is an example:

When extending HAProxy with a custom Lua module, you can now update an SSL certificate in the memory of the current HAProxy process by using the CertCache class. In the snippet below, the certificate and key are hardcoded in the Lua file, but in practice you could fetch these using the HTTP client or receive them from HAProxy variables, for example.

Also, the HTTP client that was added in version 2.5, which lets you make non-blocking HTTP calls from Lua, now supports two new parameters: dst for setting the destination address and timeout for setting a timeout server value. Setting dst overrides the IP address and port in the url parameter, but keeps the path. Below, the destination URL becomes http://127.0.1.1:8001/test.

However, since it supports HAProxy bind-style addresses, a more interesting use case is to set dst to a UNIX socket. For example, you could query the Docker API, which listens at the UNIX socket /var/run/docker.sock, to fetch a JSON-formatted list of running containers from within your Lua code, as shown in the next snippet:

This is functionally equivalent to calling the Docker API with curl:

Have you ever wanted to know whether a configuration keyword is supported in the version of HAProxy you’re running? You can now ask HAProxy to return to you a list. Keywords are sorted into classes, so first get the list of classes by passing the -dKhelp argument to HAProxy, along with the quiet (-q), validation check (-c) and configuration file (-f) arguments:

A new global directive, h1-accept-payload-with-any-method, allows clients using HTTP/1.0 to send a payload with GET, HEAD, and DELETE requests. The HTTP/1.0 specification had not been clear on how to handle payloads with these types of requests and proxy implementations vary on the interpretation, which could lead to request smuggling attacks. HAProxy uniformly rejects these requests for that reason, but the new option allows you to turn off this safeguard if you need to support specific clients.

Since HAProxy 1.8, HAProxy has had seamless reloads, which means you can use systemctl reload haproxy to update the HAProxy configuration without dropping any active connections, even under very high utilization. Listening sockets transfer over to the new worker process during the reload. The only thing you had to do was make sure that master-worker mode was enabled by including the -W flag when starting HAProxy and add the parameter expose-fd listeners to a stats socket directive in the global section of your configuration:

Now, you no longer need to do even that. Seamless reloads will work without any effort on your part. You can omit the expose-fd listeners parameter and the -W flag is already included in the Systemd service file in the HAProxy repository.

Two new fetches help pinpoint why a request was terminated. The last_rule_file fetch returns the name of the configuration file containing the final rule that was matched during stream analysis and the last_rule_line returns the line number. Add these to a custom log format to capture which rule in your configuration stopped the request.

In the next example, a custom log format includes these new fetches:

Next, the new add_item converter concatenates fields and returns a string. The advantage this has over the existing concat converter is that it will place a delimiter, such as a semicolon, between fields, and check whether the field exists to avoid appending a trailing delimiter at the end of the string.

In the example below, the add_item converter sets an HTTP cookie with the Expires and Secure attributes, which are separated by semicolons.

Variables let you store information about a request or response and reference that information within logical statements elsewhere in your configuration file. HAProxy 2.6 makes it simple to check whether a variable already exists or already has a value before trying to set it again. All tcp- and http- set-var actions, such as http-request set-var and tcp-request content set-var, now support the new parameter.

For example, if you wanted to set a variable named token to the value of an HTTP header named X-Token, but fall back to setting it to the value of a URL parameter named token if the header doesn’t exist, you could use the condition isnotset to check whether the variable has a value from the first case before trying to set it again:

You can use the following, built-in conditions:

We would like to thank each and every contributor who was involved in this release. Contributors help in various forms such as discussing design choices, testing development releases, reporting detailed bugs, helping users on Discourse and the mailing list, managing issue trackers and CI, classifying Coverity reports, maintaining the documentation, operating some of the infrastructure components used by the project, reviewing patches, and contributing code.

This site uses Akismet to reduce spam. Learn how your comment data is processed.

Comments will display after being approved by the moderator.

A powerful product tailored to your enterprise goals, requirements, and infrastructure. 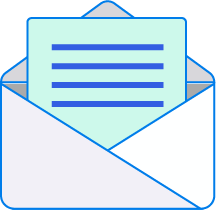 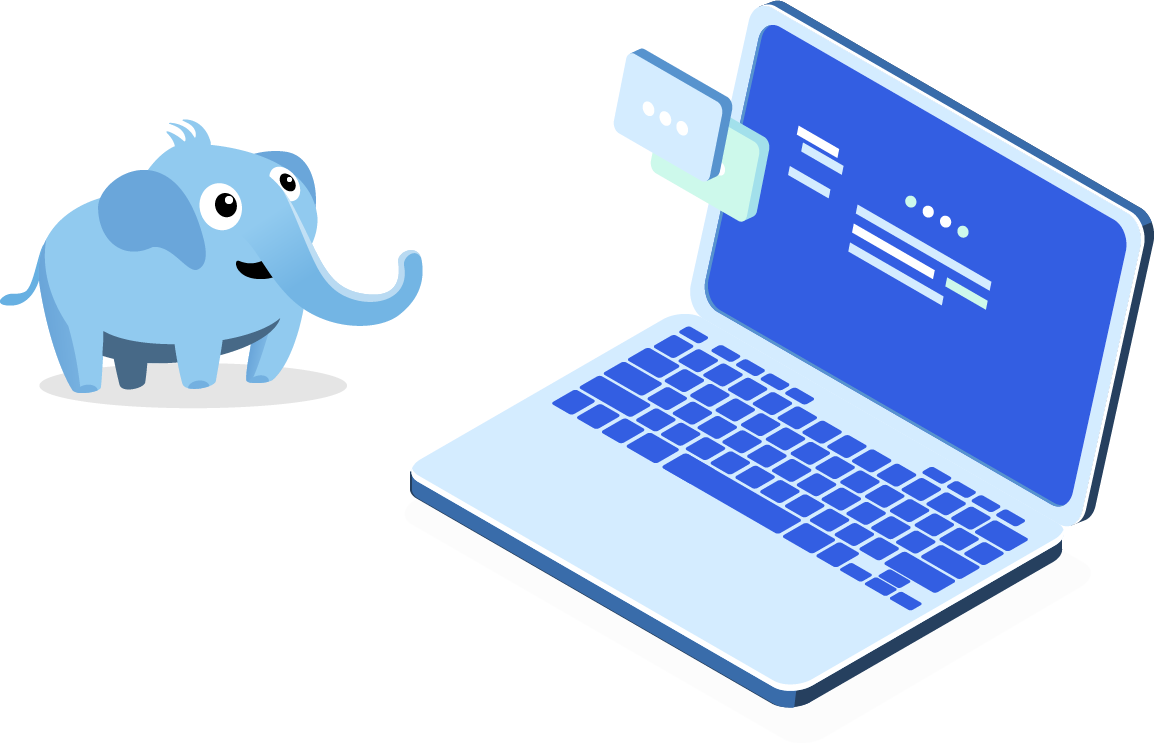